The construction industry is an important sector of Pakistan as it has multiple backward and forward linkages to other industries. The economic analysts of the country also forecast a possible potential in the industry that could drive strong economic growth in Pakistan given adequate policies are devised. This article evaluates the economic significance of the construction/architecture industry in Pakistan, specifically Sindh. It will also evaluate the contribution of the industry to Pakistan and Sindh’s GDP, and its share in the labour force. Moreover, the article also analyzes the issues faced by the industry before and after the global pandemic and the government policies in response.

Pakistan has a growing population of 207 million people with a labour force participation rate of 51.6%. All persons who are of age 10 or above are considered to be employed in the labour force. The analysis will focus on the construction industry to highlight an approximate estimate of the employment generated in the architecture industry since exclusive data on the architecture industry is not available. Pakistan’s construction industry employs over 7.61% of the total industry division with a glaring divide between male and female employment of 7.56% and 0.05%, respectively. Pakistan Council of Architects and Town Planners (PCATP) reports that the ratio of architects per thousand heads of the population in Pakistan is 0.03.

Sindh has a total population of approximately 48 million people with a labour force participation of 52.34%. Sindh’s labour force has a stark divide between the male and female populations with 36.75% and 15.59%, respectively. Sindh’s construction industry employs over 6.20% of the total employed with females only making 0.06% of the employed population in the industry. Out of the 6.20%, managers, professionals, and technicians make up 0.13%, 0.07%, and 0.03%, respectively. Employment trends have remained constant since 2006 with insignificant changes.

Challenges Faced by the Industry 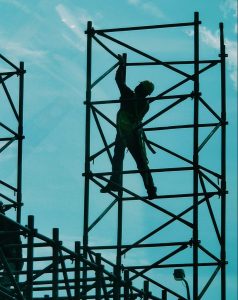 global agreements. The survey was conducted in the third quarter of 2019.

Furthermore, it was highlighted in the survey that a minuscule 7% of architectural professionals were aware of the Paris agreement on climate change but support for the implementation of the Paris agreement initiative in PCATP was fifty-fifty. Therefore, it shows that there is a dire need for awareness among the industry professionals to meet the modern standards and deal with emerging climate problems. Moreover, there is insignificant data on the architecture industry.

The impact of COVID-19 brought to light many issues that are currently faced today in the construction and architecture industry of Pakistan. With the outbreak of the virus and the large population of the country, there has been a rise in the poverty rate which has brought about a prominent class divide between the privileged and the underprivileged. The lower-class population of the country is not catered to since they are not given the same resources as the rest of the population. There has been a lack of facilities to cater to the lower class and with the ongoing pandemic, there has been more government intervention where the government has decided to increase the funding of this industry so as to provide for every class. The current COVID-19 situation has given the architectural industry an opportunity to improve living conditions not just for the lower class but the population of the country altogether. Additionally, there have been a large number of people who were laid off as a direct result of COVID-19 and still are jobless.  According to the survey conducted by PCATP, 33% of employees were laid off permanently while 42% were laid off temporarily. The sample took into account town planners and architects based in Pakistan and gathered data based on the current situation.

Pakistan has a fast-growing population with rising demands for better infrastructural development in the country. The country has faced uncontrolled growth and improper town planning in urban centres. COVID-19 has negatively impacted employment in the architecture industry. In the case of Sindh, there is insignificant data available on the architecture industry. Therefore, a great deal of primary research into this subject area is required.